The “3rd Space” Between Home and Work

When it comes to automotives, it sometimes seems as though Tesla is the only story in town.

It, or more precisely its larger than life founder Elon Musk, soaks up most of the oxygen in this area. Tesla is the ultimate Big Story stock, where the story and the storyteller dominate how people value the stock, and where the numbers sometimes fade into the background.

But there is a more interesting auto story for investors that is not widely recognised — one in which a challenged auto sector is reinventing itself by partnering with key component suppliers to develop a new generation of self driving cars enabled by sensors, big data, radar, machine learning and the Cloud.

For example, interesting to note that Singapore has recently contracted Delphi Automotive to spearhead a two and a half year project involving six self-drive cars to test the feasibility of turning the City state over to car sharing and ride hailing via fleets of autonomous vehicles. 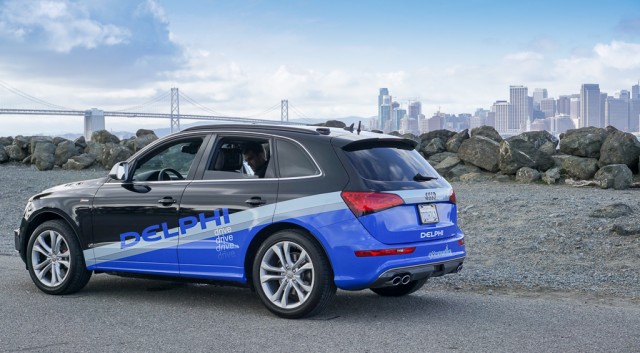 Last year Delphi retrofitted an Audi SQ5 with self-drive technology and had it drive from 3,400 miles coast to coast in the US with only one incident — a near collision with, would you believe, a Google robot car that suddenly swerved out in front of it.

At the same time….

The Japanese government has made it clear that <Fukushima leaks permitting> the 2020 Tokyo Olympics will showcase fleets of autonomous vehicles for airport shuttles, and travelling between venues and hotels.

In China the city of WuHu, 200 miles west of Shanghai, plans to ban human drivers by 2026.

Apple’s Project Titan, meanwhile, is almost certainly about the creation of a new breed of smart, secure and connected cars, a ‘3rd Space’ between home and work that is fit for the generation of urban millennials and their successor generation Zs. In fact, shortly before he died Steve Jobs had told the NYT’s John Markoff that he’d like to have ”taken on Detroit” if he’d had the energy.

The ADAS <advanced driver assist system> revolution is well and truly underway with every major legacy auto company saying it’s gearing up to bring autonomous or near autonomous production vehicles to market by the mid-2020s, with such upstarts as Tesla, Apple and the Chinese BATs — Baidu, Alibaba and Tencent — soon entering the fray as well: the latter with the support of the Chinese Party-State which doesn’t see China’s incumbent car manufacturers as being up to the mark.

Yet another example of a mega-trend in the global economy: the scope and prospects for dominant internet platform companies to jump from their core gated networks into adjacent markets — whether healthcare, finance or smart e-mobility.

There are regulatory and insurance issues to consider — not least in the wake of Tesla’s Florida Autopilot incident, which led to the death of the human driver — but the traps have opened and the race is on.

The struggle for auto suppliers to keep up with the development and deployment of the clutch of enabling technologies <eg, sensors, big data, camera software, radar, wi-fi, predictive analytics, machine learning, Cloud> is intense.

Within two to three years cars and other vehicles will have to be able ‘to see’ and navigate their operating environments far better than any bag of flesh (and entertain that bag of flesh in the process).

They will have to connect with everything from the home to traffic lights, to other vehicles and road infrastructure and do so with built in security to protect against hacking and cyber manipulation: Fiat-Chrysler recently had to recall 1.5 million vehicles with security problems.

I am watching these two Auto Suppliers

I’m sure there’s a lot more churning and M&A to come.

For example, Samsung Electronic Co is rumoured to be looking to acquire Magneti Morelli from Fiat-Chrysler for as much as $3 billion.

And I’m certainly keeping a weather eye on whether one of the German giants or a Chinese company makes a pass, for instance, at Delphi itself or at Harman International — the latter leads in ‘vehicle to everything’ technology and has just itself acquired auto security operation Red Bend Software.

I mention these two simply because they look strong, future-filled businesses, and given the feeding frenzy within the automotive shark tank both could attract predatory attention.

The industry participants know that they have to act now to develop and/or acquire the ‘know-how’ or be blindsided by the future.

For investors, it is an indication of the mid-cap opportunities that will present themselves as each industry adapts to the convergence of sensors, big data, AI, the cloud in their own way. Just as automotives are looking to component suppliers, the big players in medicine, mining, energy, agriculture will find their own way to adapt during this period of wild industrial transition.

In this week’s podcast on Artificial Intelligence, I point to some of these developments in mining, and indeed, to an attractive and deeply undervalued robotics share.

But we also look at how, in our homes and in our cars, we are seeing these technologies being domesticated into our lives, with some troubling consequences for the security of our networks.

If you haven’t had a chance to listen, you can do so now by clicking here.

You can get in contact with me about opportunities and new risks from converging technology on my new email.

I’d be happy to discuss any of the developments or any burning questions you might have about the wild industrial transition ahead.