This is the final article in the series about investing in technology – arguing that the key to finding great opportunities and negotiating the next few years of wild industrial weather is to focus on technologies that produce actionable data, and in particular, those companies that are terraforming the planet for digital life.

Hold out your right arm and then slowly flex your wrist.

Which comes first – the thought to flex your wrist, or the action itself?

In the 1980s, an experiment by the neurologist Benjamin Libet raised some disturbing questions about the extent to which we can say we are conscious before a decision like this.

In his lab, Libet hooked a group of people up to an EEG machine, measuring brain activity via electrodes on their scalp, and making use of a precise timer, he asked the volunteers to record the moment they became aware of the urge to flex their wrist, discovering an delay of 200 milliseconds before the action was taken on average.

But the recordings also revealed another signal – 550 milliseconds earlier – that suggested the brain was actually ready to act long before we are conscious of it.

How much free will do we actually have in making our decisions?

I’ve been thinking about this experiment recently in the context of technology.

The question is: to what extent will we allow artificial intelligence to guide us in our daily decisions? 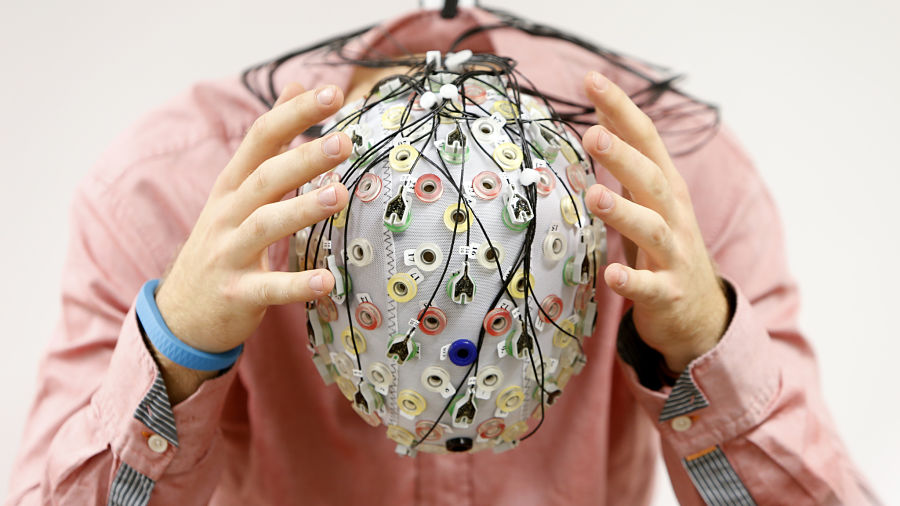 I’m convinced we will soon be able to give machine learning algorithms access to our intimate thoughts and impulses, allowing biosensors to relay useful data to networks where they will be parsed and processed with millisecond delays, presenting us with a branching tree of decisions about almost every routine in your day – what to eat, what to listen to, to whom we speak, the small lessons we might learn to incrementally adapt our lifestyle.

Mark Zuckerberg, for one, speaks of an almost telepathic means of communication by 2030, “we are going to be able to communicate our full sensory experience to someone through thought via head wear than can scan our brains and then transmit our thoughts to our friends much as we share baby pictures on Facebook today.”

How do we get there?

In the years since we decoded the genome, the scientific project in medicine has been to collect millions of data points from the population on blood, heart pressure, cells and DNA in a bid to pivot healthcare towards more preventative treatment.

This has created a flood of information on our bodies, but as scientists draw connections between DNA and health, doctors are becoming overwhelmed. There is a deep issue of interpretability.

We could feed this data to algorithms. Dr Watson, for example, is showing signs of outperforming doctors in the diagnosis of obscure conditions. Meanwhile a company such as Enlitic can apply deep learning algorithms to recognise suspicious masses on radiological scans with such success that they have been rapidly adopted into thousands of hospitals.

The issue is that these algorithms have only be trained to do a few very specific tasks. If AI is to address public health, it needs better data.

A company such as Sentrian is developing discrete biosensors that can be placed behind the ear, recognising that for many patients with chronic conditions such as congestive heart failure and COPD, the processes that lead to severe illness starts days before the patient becomes ill – with early research showing that in some people, factors such as heart rate variability, sleep duration and body temperature may be indicators of impending crisis.

This is anticipatory data – good and useful information. It is a much smaller set than actionable data but the more we feed the algorithms, the more they will find.

Biochemist Craig Venter has recently undertaken experiments that sequenced the genomes of thousands of people in order to reconstruct their faces simply from the genetic information – predicting your height, body mass, eye colour, hair colour and texture. “Whether it’s the shape of your face, or a diseased aorta, or a narrowing of your spinal cord, we want to measure it so we can be able to predict those conditions in the future from the genetic code,” he says.

Goldman Sachs estimates that a new $30bn industry will be born as US healthcare embraces sensor fed IoT.

Technology at your service

In this way, all of the technologies that will cross the chasm over the next ten years will be used in the service of collecting and processing genuine information from the atomic rush and jumble of collectible data.

AI will be charged with recognising and anticipating disease. We will engage with it, taking increasing responsibility for our own healthcare, allowing it to guide us on what drugs to take, how much weight to lose, how much drink we can continue to take on board before it begins to colour the extremities of the face.

Once we are in a virtual environment and we are under observation, the algorithms can track every gesture, eye movement and emotional state.

But with all this access, will we actually abdicate our decisions to this intelligence?

In the wake of controversy over his experiments, Benjamin Libet argued that though we are not consciously aware of our impulse to act, there is still room for a veto over the decision — one that is available for 300 milliseconds before an action is taken.

In his book, Mind Time: The Temporal Factor in Consciousness, he even presented a timeline…

In the next decade, as machine learning algorithms become increasingly independent and sophisticated, constantly fed with anticipatory data from sensors and processed without delay, we will begin to recognise a tension in our decisions between our conscious impulse — at 200 milliseconds — at the decision we finally take to act.

This delay will get shorter and shorter as we recognise how useful this information is, trusting the network, inviting it into our domestic routines.

And we want this. We want the machines to extract genuine information and to guide us to better decisions, maybe even to discipline us.

I would point to three takeaways for investors…

In this respect, I think Shinto cultures will have a great advantage because they recognise that these technologies belong to us. They are our brainchildren and entirely natural.

And while we in the West, understandably, tend to be cautious about how we apply technology to medicine, for example, the Japanese will race ahead with advances in stem cells, robotic medicine and even gene editing techniques such as CRISPR.

Meanwhile in China, the availability of huge streams of population data means that a company such as Shenzhen BGI can make great strides in testing and improving the quality of information and technology at its disposal.

Right now, the company is even working to understand the genetic basis of genius. Expect more Chinese pianists and athletes to take center stage.

2. Invest in the enabling technologies

The immediate opportunity is to invest in companies that enable genuine information — the likes of Sentrian, Enlitic. According to a report by Juniper Research, the global market of wearable smart devices alone will grow to $19 billion by 2018.

This is a message that applies to every industry, just as it applies to Automotives, Agriculture and Security.

3. Layer after layer of technology…

As we learn to trust artificial intelligence and the data it feeds us, we may use our veto sparingly. We will certainly come to rely on this infrastructure.

And in the next decade, we will see layer after layer added to the stack of technology, with companies fighting it out for dominance on each new platform, and $30bn industries born and destroyed in the process.

In many ways, the Global Brain is already here: We have these zero latency networks, we outsource decisions to them, and we are defined by what we are connected to more than anything else.

In a 1939 paper titled “Systems of Logic Based on Ordinals”, Alan Turing describes a succession of systems, maintained by a “new class of machines that proceed deterministically, step by step, but once in a while make non-deterministic leaps, by consulting a kind of oracle”.

This “Oracle Machine” is close to the way may intelligence work…instead of learning from one mind at a time, the machine learns from the collective, all at once. Amid all the activity, a picture of our AI future is coming into view. And it is not the HAL 9000 – a discrete machine animated by a homicidal AI. And it’s not a Singularitan rapture of superintelligence.

Kevin Kelly: “The AI on the horizon looks more like Amazon Web Services—cheap, reliable,industrial-grade digital smartness running behind everything, and almost invisible except when it blinks off. This common utility will serve you as much IQ as you want but no more than you need.”

Drop me a message

That’s it for this series. I have a number of reports in the pipeline – not least a few interesting prospects I discovered in my recent research on India.

I’ve appreciated the feedback so far. If you have had any interesting thoughts while reading this series, feel free to get in touch with me.

I would sincerely like to hear any concerns or perspectives on how technology is affecting your investments.

Are you concerned about mature companies being wiped out? There are certainly a whole swathe of blue chip companies at risk of severe disruption.

Are you investing in Shinto cultures?

What new industries have piqued your interest?

Drop me a message here.

It would be good to chew the fat. In the meantime, have a good weekend.