The ability to re-engineer matter — living and non-living — at the atomic level is a key industrial story of the coming decade.

The world of genes, proteins (3-100 nm), bacteria, viruses, telomeres, mitochondria (1-100 microns) and animal cells (mm) will come sharply into view as we seek to manipulate matter at the level of the atom and the cell. This is enabled by new scientific instruments such as electron-force microscopes and deep learning AI: which reveal in sharp relief the activities and patterns at the nanoscale — a ‘resolution revolution.’

In fact, the field of “nanomedicine” is now maturing, and we think it heralds the design and construction of a great series of biological particles: nanoparticles that bind to tumours and viruses; particles that improve the delivery of drugs; clusters of ‘living’ particles that can perform basic tasks.

A Library of Occult Creatures

We can date this field back as far as 1665. Just as a pandemic was sweeping the major cities of Europe, the polymath Robert Hooke received a present of a powerful microscope and delighted by the possibility of fresh discovery and distraction, he began to collect samples in his garden.

Studying the samples under his new lens, he found a microworld of “occult creatures”: micro-eels, snowflakes like “fronds of living ice”, fleas with articulated armour, a fly with 14,000 eyes in perfect order on two hemispheres.

During this pandemic, we’ve found ourselves looking at pictures of equally strange creatures. Many of the pictures were produced by Elizabeth Fischer of the Rocky Mountain Laboratories, who has spent three decades creating images of deadly diseases – from Ebola to HIV to salmonella. Frischer has made a whole series of Sars-CoV-2 available online for free. 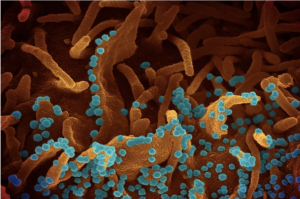 Both these images were produced by electron microscopes. These instruments work by using a beam of electrons to examine the structures of virus at the atomic scale. As the beam passes through a very thin sample, it interacts with the molecules, which then projects an image for scientists to study on screen.

These microscopes have proved invaluable during the last few years. A team at the University of Texas used electron microscopes to create a working model of the virus in the early days of the pandemic. The microscopes took hundreds of thousands of images of virus, and produced a 3D model from the scans, assembling the atomic structure of Sars-Cov-2 that we know today: with characteristic “crown-like” glycoprotein spikes that inspired their name.

By using these high-resolution images, the scientists found that the spike proteins on the virus were at least 10 times more tightly bound to their host cell than the spike protein on the previous SARS virus. That helped them to understand the structure and behaviour of the coronavirus and it’s proving extremely useful in developing tests and antibody therapies.

Life at minus 180 degrees

To achieve this, the team used a technique known as cryogenic-electron microscopy, or “cryo-EM” for short.

These Cryo-EM machines are the result of a perfect storm of improvements in camera technology, image processing, reduced cost and increased computing power, and they are changing medicine by allowing us to delve very, very deep into the nanoscales of life.

Crypo-EM builds on work by 2017 Nobel winner James Dubochet, who developed a method of rapidly freezing water samples so that the water in the sample forms as a disordered glass, rather than a crystalline structure of frozen ice. This meant that the electron beam was no longer diffracted, bouncing off the crystals and ruining the resolution of the image.

By dropping a sample into a bath of liquid nitrogen, you could freeze thin layers of the structure and then use the vitrified sample to produce extremely high-resolution images of the molecule.

In fact, according to Hongwei Wang, a structural biologist at Tsinghua University in Beijing: “in the next two to three years, cryogenic electron microscopy will become the most powerful tool for deciphering the structures of macromolecules. These structures are crucial for understanding biochemical mechanisms and drug development, and methods for solving them more efficiently can speed up such work.

In cryo-EM, quickly freezing biological specimens in liquid nitrogen helps to preserve the molecules’ water content and reduces damage from the high-energy electrons used for imaging. Many images are imperfect, so we have to discard them. But theoretically, a few dozen pictures should be enough, and it would take less than a day to collect and analyse them. This increased throughput could help us to understand disease mechanisms and develop drugs far more efficiently.

Thermo Fisher leads the ”resolution revolution” for microscale research and engineering. Their suite of electron force microscopes can automatically document thousands of particles per hour, detecting the size and shape of each particle, and identify the elemental composition.

The main threat to Thermo Fisher, may come from something like DeepMind’s AlphaFold: which beat 100 other teams into a cocked hat in determining a protein’s 3D shape from its amino-acid sequence. This system could replicate the power of cryo-EM instrument, and could speed the process of investigation at the nanoscale, with major implications for pharma R&D, although there are obvious constraints to applying this system in a laboratory setting.

Drug delivery will be one fertile area of research as scientists are benefiting from decades of research into carbon chemistry, such as buckyballs and carbon nanotubes, that have also been proposed as potential drug delivery vehicles.

For example, nanoparticles that are optimised to bind strongly to and accumulate in cancer cells mostly accumulate in the first cells they encounter and need to be small enough to leak into the tumour environment. Alternatively, you could design a nanoparticle that binds weakly, which would be detrimental to the function of the individual nanoparticle, but could lead to a better system outcome if the nanoparticles are tuned to act collectively.

Nanoparticles have the potential to target more than one receptor, extend the time of availability in the blood, and tackle physical obstacles such as intestinal lining or the blood-brain barrier.

Many studies have shown that nanoparticles can detect and kill cancer cells in vitro. However, as Oxford biophysicist Sonia Contera points out: very few of these nanoparticles have been translated to clinical use. The problem seems to be that nanoparticles, in most cases, do not reach the actual tumour. The majority of injected particles come to a halt in the liver, spleen and kidneys, as these organs work to clear foreign particles from the bloodstream.

Gold nanoparticles have drawn great interest in industry and nanomedicine due to their excellent electrical and optical properties. They are used to detect DNA sequences, proteins, bacteria and viruses and they are frequently used in cancer studies and as antiviral and antibacterial agents.

As an immune activator, gold nanorods can inhibit H1N1 influenza by upregulating the expression of interferon-stimulated genes, which interferes with the virus’s ability to replicate.

Gold nanoparticles have also been shown to: inhibit attachment and penetration of foot-and-mouth disease virus at the early stages of infection and impairs viral replication at later stages. When conjugated with peptide triazoles, they can exhibit significant antiviral effects against HIV-1 compared to the corresponding peptide triazoles alone.

In time, gold nanoclusters, composed of tens and hundreds of gold atoms with an average size of 1–2 nm, could play critical roles in biomedicine. Gold nanoclusters have been shown to prevent entry of porcine reproductive and respiratory syndrome virus into host cells, for example. There is potentially a sizeable market as we battle respiratory viruses in livestock.

Quantum Dots (QDs) are man-made nanoscale crystals that can transport electrons – with an average size between 2–10 nm. When UV light hits these semiconducting nanoparticles, they can emit light of various colours. Led by Chinese TV giants TCL, HiSense, by Samsung, HPE, among others, QDs are a key component in ultra-high definition displays: boosting colour, brightness and power at a fraction of the cost of competing light-emitting technologies.

Quantum dots also enable researchers to study cell processes at the level of a single molecule and may significantly improve the diagnosis and treatment of diseases such as cancers. QDs are either used as active sensor elements in high-resolution cellular imaging, where the fluorescence properties of the quantum dots are changed upon reaction with the analyte.

The clear leader in this field is Nanosys, which owns and operates the world’s biggest QDot nanomaterial lab. The company says it was rapidly reaching capacity for its existing production lines at 25 tons annually, but recent investment has doubled commercial production capacity to 50 tons annually, and more.

To see just how fast this whole field of nanomedicine is developing, I recommend that you follow the work of Michael Levin and his “Xenobots” project.

These “living robots”, he claims, will move, pick up objects, and even heal themselves after being cut: primitive machines that could one day be used to clean up microplastics in the ocean or deliver drugs.

To build the robots, the team used living cells from frog embryos and assembled them into millimetre-length organisms, each with a week to ten days of “power” courtesy of living heart muscle cells that were able to expand and contract on their own.

These millimetre-length robots were designed in the popular mode: an “evolutionary algorithm” tested thousands of 3D designs for rudimentary life forms in simulation, creating a fresh gallery of programmable beings.

The scientists then built a handful of the designs, which were able to propel themselves forward or fulfill basic tasks. Some xenobots with a fork-or snowplow-like appendage in the front can sweep up loose particles in a petri dish overnight. Some use legs, of a sort, to shuffle around on the floor of the dish. Others swim, using beating cilia, or link up blobby appendages and circle each other a few times before heading off in separate directions.

It sounds far-fetched, but if you have ever watched videos of myosins walking along genetic nucleotides on YouTube, you might be persuaded by the potential for programming nanomachines to do productive work.

Levin believes that electrical signals in bodies create bioelectric currents that encode for anatomical patterns. At this level of life, the nanoscale, it seems we are discovering a new physics for biology.

This method of interrogating biology, as biophysicist Sofia Contera describes in Nano Comes to Life, leads to an inexorable blurring of the distinction between biological and material sciences: “a new transmaterial science is in its embryonic state”. With increasing control of matter at the nanometer scale and better knowledge of the machinery of biology, artificial materials will be used to create a new archive of microlife.