In a Flat World, the Story Counts

In profiles following the deal, he was described as “an unrepentant visionary”. Someone who was “pushy”, “risk-addicted” and “crazy”.

I met him twenty one years ago when I was doing some projects with the technical and computing publishing giant Ziff-Davis. Masayoshi had just acquired Ziff for what was then a royal sum of over $1 billion, and he came to the London offices to talk to us.

He told us that he had a 500 year plan to deploy technology to make humans happier, and the way this small, cherubic guy presented his story, it didn’t even raise a smirk among a sceptical audience of journalists.

I think that he’s lopped a few hundred years off his plan since but he’s still insistent on his mission. He sees ARM as a ‘platform’ company in pole position to become the dominant platform for IoT. As he put it: “supply platforms get to claim the largest market shares by far”.

“Competition is for losers”

In tech it helps to have the aura of being able to summon the future.

Any start-up that doesn’t show the clear ambition, plan and competence to monopolise their target market will attract little interest from VCs.

”Competition is for losers'” as Peter Thiel puts it in his must read 2014 book, Zero to One. And that’s the mentality among those providing capital to the next Uber, the next AirBnb.

He co-founded Paypal, and put the first outside seed corn funding into a Facebook that was still in the dorm, turning $500,000 into over a billion dollars.

He’s big into longevity and like many in the Valley sees death as an affront and a scitech problem to be solved. For example, he’s a leading advocate of the seemingly vampiric process of parabiosis: using the blood of the young to drink from the fountain of youth (an area where China and Korea are currently ahead of the game in terms of R&D).

In an unchanging world monopolies are rent collectors.

But today’s world is freewheeling into the future and it’s the monopolists who are driving it.

Companies such as Google and Facebook have become clear and temporarily sustainable monopolies that have structured their companies so that their driven founders have a controlling interest of the equity, allowing them to severely limit the power of shareholders and other outsiders.

I had an early and prescient dousing in all this when I worked in the 1980s and 1990s at was was then Silicon Valley’s premier marketing consultancy Regis McKenna.

Regis (pictured below with Jobs) was even then and is now very much a Silicon Valley legend.

He was Steve Jobs’ Svengali in the early days of Apple and was close to him until the end of his life, and the confidante of the Intel and Genentech founders.

He once had Jobs, Gates and Andy Grove as clients at the same time. 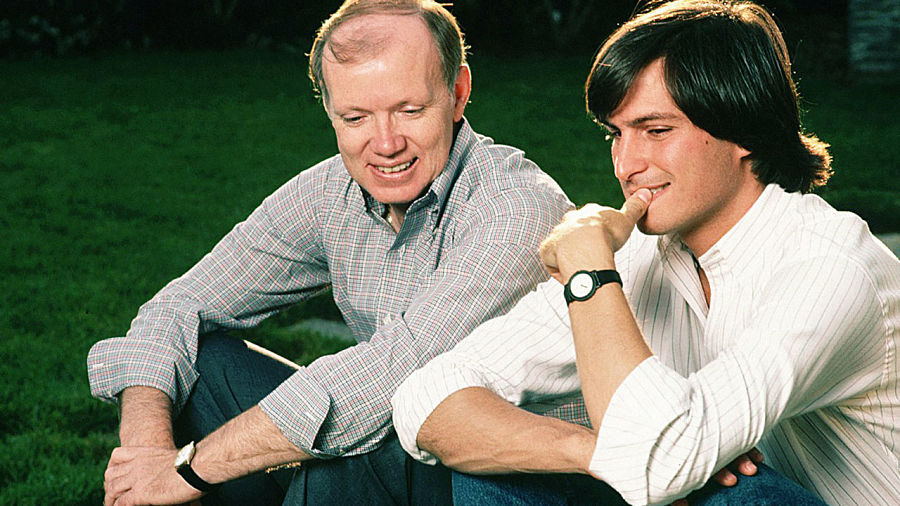 As he told me, although these giant egos didn’t compete with each other in the product marketplace they did when it came to media attention. He lost Gates as a client when he got Jobs on the cover of Time magazine first. But then, compared to Jobs, Gates and Microsoft were boring.

For Regis: to score, a company had to have three things:

So we’d spend hours with customers developing ‘elevator pitches’ – explaining in a scintillating but pellucid way what the company does and why it’s different in the time it takes the elevator to get from the ground to the fifth floor: average 60 seconds.

The idea was taken from the way a script writer had to pitch a story line to a studio producer in Hollywood.

There was what was called the Don Simpson test after the famous Hollywood producer who would be on two phones, and quite likely powdering his nose as you got your two minutes to pitch him.

What many don’t appreciate is that most people, however businesslike and serious their mien, like a chuckle and to be entertained.

Can They Create a Market?

So Jobs and Wozniak ‘created’ the ‘personal computer’ market amid an already buzzing hobbyist and home computer market.

So Noyce and Grove ‘created’ the microprocessor as a ‘computer-on-a-chip’ versus scores of the contenders with similar chips, notably Motorola.

Indeed the Intel microprocessor emerged from a logic chip that the company had developed for a Japanese calculator company which it didn’t want in the end.

So Regis suggested that they took a series of splashy ads in the electronics press to introduce the world’s first ‘computer-on-a-chip’ and invited developers to ‘come and get it and do something with it.’ They did.

The microprocessor was positioned as a computer rather than an electronic component.

Intel ‘owned’ that market in the PC era of the 1990s to become the premier money making machine on the planet. It even subsidised and helped AMD to make a play as a competitor to avoid an anti-trust investigation such as stalled Microsoft.

I remember standing in a small circle of people with Bill Gates at the height of the anti-trust fracas and he commented ”it’s not my fault the competition is so inept.”

The Investment World is Becoming Flat

So moving into this century: Page and Brin said they were selling ”an AI” when they launched their search engine into an already crowded search engine market, which they indeed were.

And just reflect on what messrs Kalanick and Chesky saw when they saw empty car seats and spare rooms respectively.

This is the phenomenon of the ‘story company’, ‘the story founder’ and the ‘story stock’. And it’s here to stay because in the face of today’s uncertainties we don’t trust ourselves to attach values to companies and to price stocks.

The investment world is becoming flatter and is now about faith as much as mechanics.

I’m a big admirer of Professor Aswath Damadoran whose Musing on Markets are a must read for me.

He has arresting analyses of the power of the big story over precise quantifications amid all the uncertainties — what Keynes’ protege F.P. Ramsay called committing ‘the sin of scholasticism.’

He obviously points to Amazon and Tesla as big story stocks.

If any two people are perceived in some quarters to be summoning the future and the bottom line be damned it’s Bezos and Musk, while Zuckerberg thinks nothing of spending billions to close off the future to erstwhile competitors via acquisitions.

Bezos has proved he can make cartloads of money but chooses to spend it as it comes in on acquisitions, tech investment and ruthlessly undercutting the competition, which is being eviscerated not just in e-com, but progressively in unvirtual retail as well, not to mention the cloud, media and, on its way, the ‘smart home.’ Bezos effectively created and ‘owns’ the e-com and cloud markets.

As for Musk he has been able persuade enough shareholders to stump up large amounts of cash by giving away more and more of his company, while his competitors in the auto market are forced to borrow in the bond markets or from banks to follow the lead he has forced on them in e-mobility and ADAS. And Tesla has a cachet which none of them can match.

Given the recent fracas in some quarters over the acquisition of Solar City, investors range from those who see the shares going to zero and those who see Tesla becoming a trillion dollar company dominating the battery, e-vehicle/smart car and solar energy loop.

Cars can burst into flames, deadlines can be missed, and losses mount but Musk seems able to mesmerise enough investors, a good many of them owners of Tesla cars, into believing that he stands in front of the future, just as Amazon did with its build and bind in the customer base as fast and furiously as possible and the devil take the hindmost in its first phase and as it still does to all intents and purposes.

So apart from Masayoshi Son, Bezos, Musk, Zuckerberg, Page, who else is being perceived as those who can summon the future?

And how about Rony Abovitz at Magic Leap? 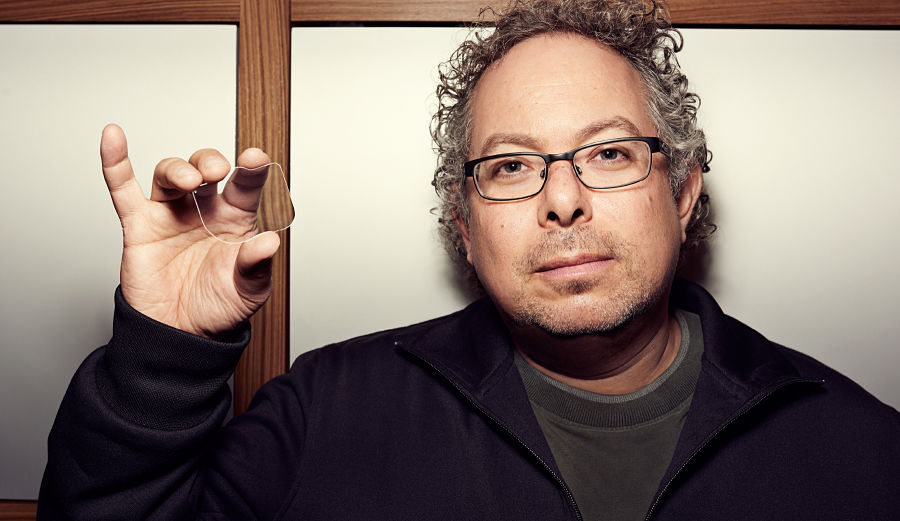 He has relieved Google and Alibaba and several others including Fox and Disney of $1.4 billion in start-up funding. They have been persuaded that he is in the process of inventing the future — a future based on lightwave technology that games the brain’s GPU to become its co-processor, enabling the arrival of a ‘mixed reality’ world where the virtual and unvirtual will seamlessly co-exist to revolutionise our awareness of the world.

This is an immediate future in which we have persistent access to all the world’s data — visual, aural and audio, raising our IQs as we go about our lives at home and at work and elsewhere besides. A tall order but Google bought in to the tune of $500 million.

The world is freewheeling into the future, and it’s the serial monopolists with the user bases, datasets and algorithms who have the power to devastate the status quo, whether progressive or not, and investors need to look to their laurels across all their portfolio holdings.