4 Ways That AI is Changing How We Invest

Legendary macro manager Paul Tudor Jones has been having a rough time of late.

Last year, his funds were struggling for performance and investors started pulling out – there were $1bn in redemptions in the first quarter alone.

He admitted that after thirty years in the business he couldn’t trust himself to run the money anymore and brought in 20 macro traders, but they failed to stop the rot.

So now he’s bringing in the machines – hiring data scientists and coders to develop machine-learning models that will find the patterns in the data where his macro managers have failed.

In The Matrix, Agent Smith put it another way….

“Never Send a Human To Do A Machine’s Job”

This is a story that is playing out across the investment community.

Hedge funds, macro funds, investment houses of every description are experimenting with AI, seeking to discover new patterns, new opportunities, in some cases even going so far as to fire staff and replace them with self-learning, self-evolving algorithms free of human intervention.

Is this a fad or a takeover?

In a spirit of joyful union, I will assess the impact of four promising breeds of artificial intelligences in today’s briefing…pointing out how they are being used and how long the humans might have left.

Ironically, back in 2001 Tudor Jones backed a pioneer in this field called Two Sigma, giving its team office space.

Two Sigma, which has been totally data and software analytics driven since day one, now has nearly three times more money under management than Tudor Jones, and keeps on handily beating the indices and its peer group.

It has enjoyed considerable success using machine learning algorithms to digest and analyse 22 million gigabytes of data from 10,000 data sources round the clock to find edgy patterns, and sports 8 Gold and Silver International Math Olympiad medallists in its crew.

As we have seen, these deep learning algorithms have proved enormously adept at identifying images, recognising spoken words and they are very close to replicating the complex patterns in human speech.

Now they are helping the flesh and blood at Two Sigma find patterns, and in time, fed with enough training data, these algorithms will grow increasingly autonomous.

As co-founder and MIT alumnus David Siegel (pictured below) likes to point out: ”the human mind hasn’t got any better in the last 100 years” while in the last ten years alone a real time, densely networked world has sprung to life, one that is saturated with useful financial data.

“The Human Mind Has Not Improved in 100 Years” 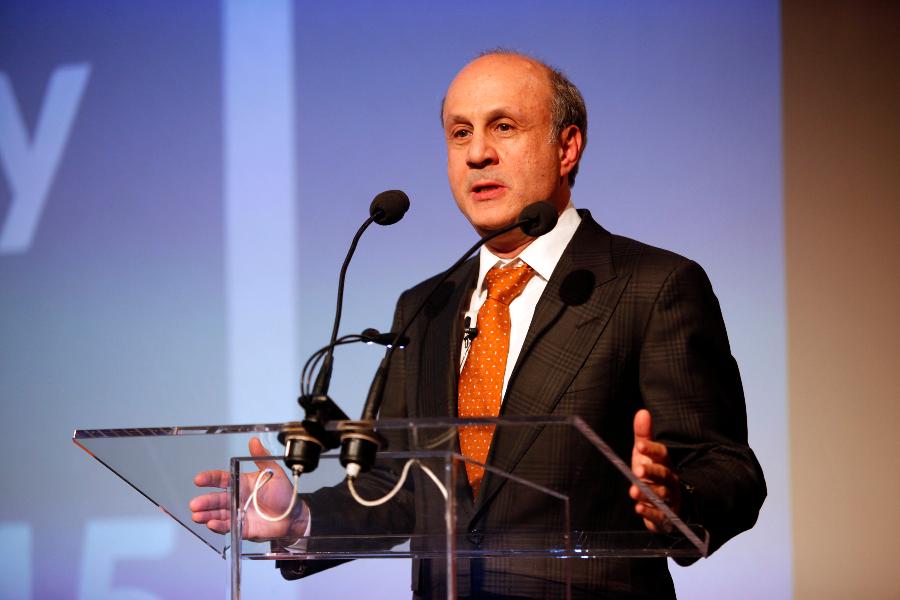 ”Eventually, the time will come that no human investment manager will be able to beat the computer.”

But what is meant by “eventually”? A non-trivial question.

It is also difficult for investment managers to understand and assess and is often ‘too brittle’ where there’s a very low signal to noise ratio and/or high uncertainty.

Besides, the global competition for the scientists and mathematicians who can build the models is savage and will remain so while we wait for the software itself to take over the job.

So while some ‘math houses’ like Two Sigma, D.E. Shaw, Winton, Renaissance Technology have made AI score, the vast majority of front office investment organisations that are working with it haven’t, and the more that do grapple successfully with it the more the prospective benefits get arbitraged away anyway.

Google’s AlphaGo, which astounded the world last March by beating Lee Sedol, the human GO champion, is inevitably a basis for speculation about to what extent the machines can juice the front office investment engine. 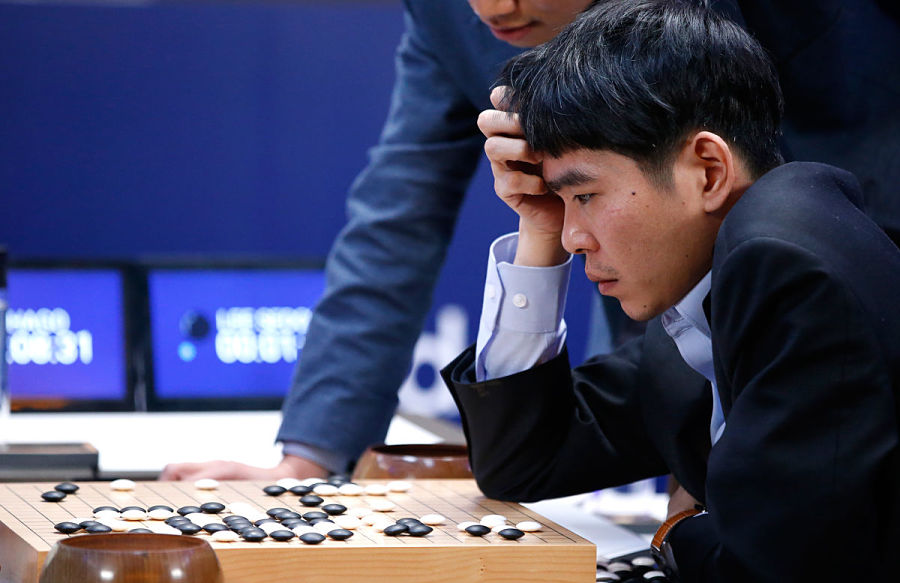 What was fascinating was that AlphaGo made moves that were clearly non-human and eerie: moves that no human could have even contemplated.

Moves that could look at least 50 moves ahead having taken on board all Lee Sedol’s possible moves.

This is the promise for those fund houses that have the scale for deep learning. But it’s by no means the only AI at work in the field…

We noted last week how Ray Dalio is turning Bridgewater over to AI via the IBM Watson approach having burgled IBM for key design engineers.

This is the “AI as utility vision” that Kevin Kelly has been talking about – cheap, reliable, industrial-grade digital smartness running behind everything.

Watson is in the vanguard of AI and along with the online consumer platform giants will be a powerful shaper of AI-driven investment and financial services.

Watson is a cognitive system able to answer questions posed in natural language, which it reads and interprets and uses to interrogate a rich domain specific database for insights, decision support, and guidance.

Watson has already made its mark in certain areas of medical diagnostics and as the cloud based ‘brain’ for the SoftBank Pepper social robot.

Among a multitude of other target domains, IBM aims to develop its Watson DeepQA technology into the ultimate financial services assistant.

A hint of what is brewing is this month’s announcement that Japan’s Fukoku Mutual Life is to replace 34 claims staff with Watson, which will read, assess and compare their complex of claims documents and reports to calculate payouts to policyholders.

Fukoku will save $1 million a year in staff costs…

IBM will be a force in financial services.

Another promising approach is with evolutionary, genetic and Bayesian programming.

They then study how these various factors have interrelated historically in order to isolate an output with predictive value.

Is this just a retread of genetic algorithms that burned up billions in capital during the 80s? It could be.

Again though, I go back to what I said in my previous briefing: The simple answer is that the hardware has now caught up…

There’s now enough available raw computing power and specialist chip technology at work to enable the development and deployment of non-trivial AI: machine intelligence that can recognise images, sounds, just as it can recognise and parse financial data.

There are a multitude of new connections that can be made in real time. Software that can gather satellite images, for example, could see how full a retailer’s parking lot is. That’s likely to correlate to the company’s revenue, which should correlate with the stock price.

This Doesn’t Compute With Revenue 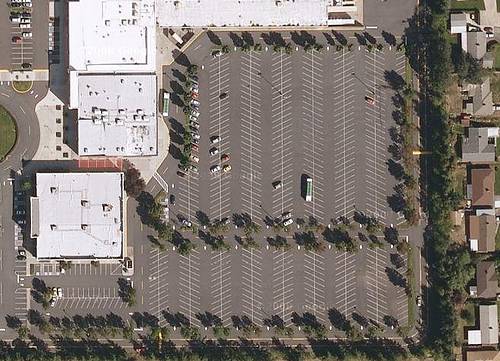 I’ll be watching this space closely – others are likely to follow the example of Aidyia.

For example, just before Carl Icahn announced he was buying a major stake in Apple in 2013, feedback from 400,000 Twitter accounts revealed a lot of positive chatter about Apple enabling some investors to make a quick turn.

Meanwhile, at Sentient Technologies, the world’s most lavishly funded early phase AI company with $143 million from Li Ka-Shiong and Tata Communications among others, they use software that mimics natural selection and the ‘survival of the fittest’ in biological evolution.

Trillions of software agents are set in motion competing with each other.

So investing algorithms are bred and the more successful ones are spliced into news ones and so on theoretically ad infinitum to produce human beating algorithmic traders.

Sentient won’t reveal how successful their algorithmic traders have been so far, but it has been working closely at an experimental level with J.P. Morgan’s Highbridge Capital Management Fund with high level; staff swaps involved.

All of this AI is being honed for a world where creative chaos rules, trust has collapsed, and Donald Trump, who sees life as a game of liar’s poker, is moving into the Oval Office.

The foundational question remains to be answered — are markets rule based like the game Go?

It may take quantum computing and the discovery or otherwise of a quantum code of the stock market to resolve that one!

1. Front office shakeout: it is, as we’ve just been discussing, already radically disrupting the operation of the front office investment engine. (We are also in the process over the next five years of automating back office reconciliation, transfer and settlement via Blockchain.)

2. Tech Giant takeover: It will bring to the fore companies outside the industry – IBM, Google, Amazon, the BATs – to do what the industry can’t or won’t do itself: get closer to a tech savvy, mobile lifestyle customer base. Over the next several years this will be where the action lies rather than with the ageing and dying current baby boomer dominated base in the West. The Chinese BATs have already shown the extent to which this will be a world dominated and shaped by hyper-scale internet platform companies offering rich ecologies of online financial and investment services.

3. Terrible Meltdowns: Of course, there will be Knight Capital style meltdowns – that’s a good marker for now in fact: $440m burned up in 30 minutes. Let’s see how long before some of the experiments with self-learning algorithms go rogue, turn on each other and burn up a huge amount of capital.
As one cynical line has it: “all computers do is replace human stupidity with machine stupidity that devours markets much faster than any human can.”